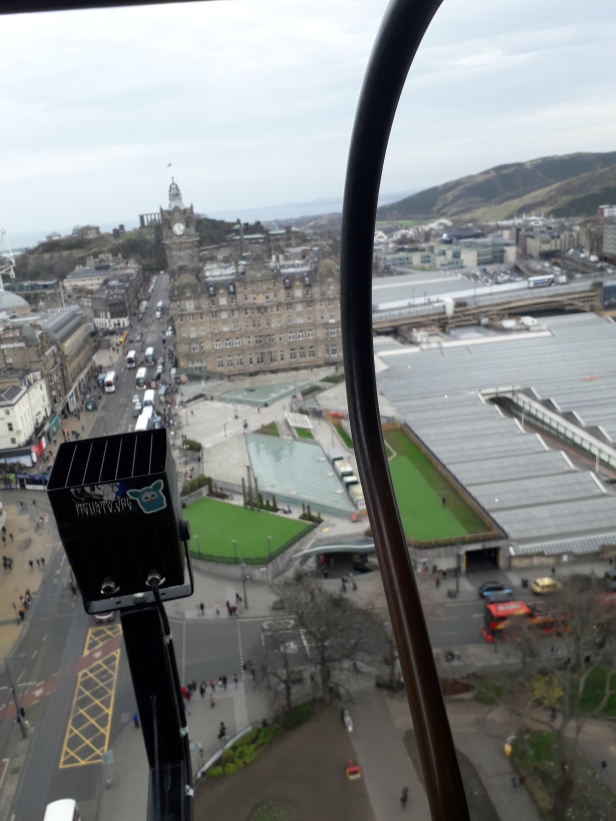 So my February challenge is complete, and to my total surprise i actually made it right the way to the top of the Scott Monument! The last time i attempted i got half way up, then had to be helped down by some tourists-therefore i was dubious as to whether or not i’d manage. Last year i got up to the rooftop of Melrose Abbey, so i knew that heights were becoming less of an issue, but the monument has some added bonus features as well as its sheer height. Most notably there are the super claustrophobic stairways, especially toward the top. If you should meet someone on the route up, there’s a good chance you may have to squeeze up against the outer wall of the stairwell while you pass-if it’s even at all possible. There’s also a good section of the last staircase which has a cut out pattern in the stone, protected by what looks like chicken wire, which I found quite terrifying (in reality, it’s probably super safe reinforced steel caging or the like, but at that height and proximity it felt like chicken wire to me!) 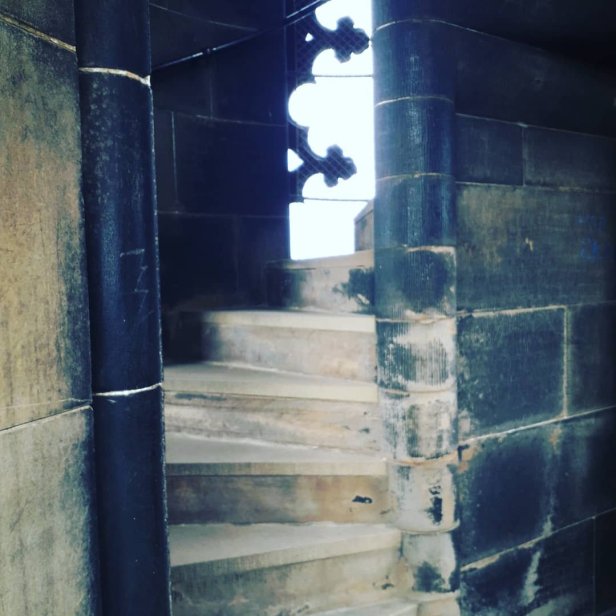 I was kindly reminded of all these features when i bumped into a friend on route to start this challenge, which was super! I actually felt way more nervous about the monument than many of the other challenges I have coming up, despite it actually being one of the least adventurous. I met with another friend during his lunch hour from work so he could come along for ‘moral support’ and assistance should i have a total paper bag panic moment. Predictably in the style of my friends, we got about six steps up before he announced that he would under no circumstances whatsoever let me back down the stairs past him until we reached the top “even if you are screaming and crying”. Not quite with the vibe of the project, but I’m almost totally sure he was kidding-not 100%, but a solid 80 at least!!

Even though i spent the last 50 steps doing a really weird, shaky, creepy-crawl up to the top i managed it without as much panic as i thought i was going to feel. My legs were still pretty wobbly, and remained so for upwards of an hour later. Yes, I’d had to do the aforementioned crawl to the end, but I wasn’t anywhere near the hysterical mess that i had anticipated given my previous experience. This i put down to many factors. There’s the fact i was becoming more accustomed to heights through exposure at places like Melrose Abbey over the last few years. The fact i had ‘support’ in the form of my friend Cammy (who actually did a sterling job keeping it together as we neared the top, and he realised he was also sh*t scared of the height/claustrophobia combo!) There’s the fact i felt an accountability due to the Year of no fear project, and although i’d never force myself to do a challenge if i was terrified just to save face, i really felt this one to be achievable. Overarching all these factors though was a realisation that had hit when i was exploring where the fear in this task was arising from.

You see, when i broke down to the root of what was driving the fear it was a bit of a revelation moment. I’m not scared of heights. But I’m not scared of falling from a height when I’m inside a tall building, or somewhere i feel is solid. I’m not scared of heights when climbing Arthur’s Seat or the Pentlands. I’m not so scared of heights when i’m strapped into a roller-coaster or similar-somewhere i feel securely strapped in. I’m scared of falling, of not feeling solid and secure. And the fact i don’t feel solid or secure walking up a set of stairs, no matter how steep or narrow, the fact my legs shake underneath me and i don’t feel safe can mean only one thing-i’m lacking in trust. Now it’s not the stairways that hundreds of thousands of people have been up and down without event i don’t trust. It’s not the stone monument that has stood solid for hundreds of years i don’t trust. The simple basic truth at the heart of it i realised is- I DON’T TRUST MYSELF not to fall. I don’t feel capable of keeping myself safe in that situation, so i panic. I was no more happy about this revelation than i was about the realisation i was still holding myself back due to fear of what people though about me-which sparked this whole project. It was fighting to counter this limiting self belief i was holding which drove me up to the top to complete the challenge. I kept telling myself i was secure, stable and capable of getting safely up the stairs. So basic, but it worked- my anger at myself once i knew what the root of the issue was also provided good fuel for the fire!

Challenge two has taught me about the importance of self belief and the stories we assign to ourselves. It’s taught me the value of exploring the roots of some of our limiting self beliefs, and how we can re-write the narrative. Most importantly, I’ve discovered that my disproportionate amount of fear around my Scott Monument challenge had nothing to do with the challenge itself, or how it measured on the adventure scale-i was simply most scared about that one because it was the one i was just about to do. 😂😂😂😂 Now i feel exactly the same about the March challenge, and so continues the year of perpetual terror!😨😂 look just how thrilled and liberated i look two months in…🤔😂